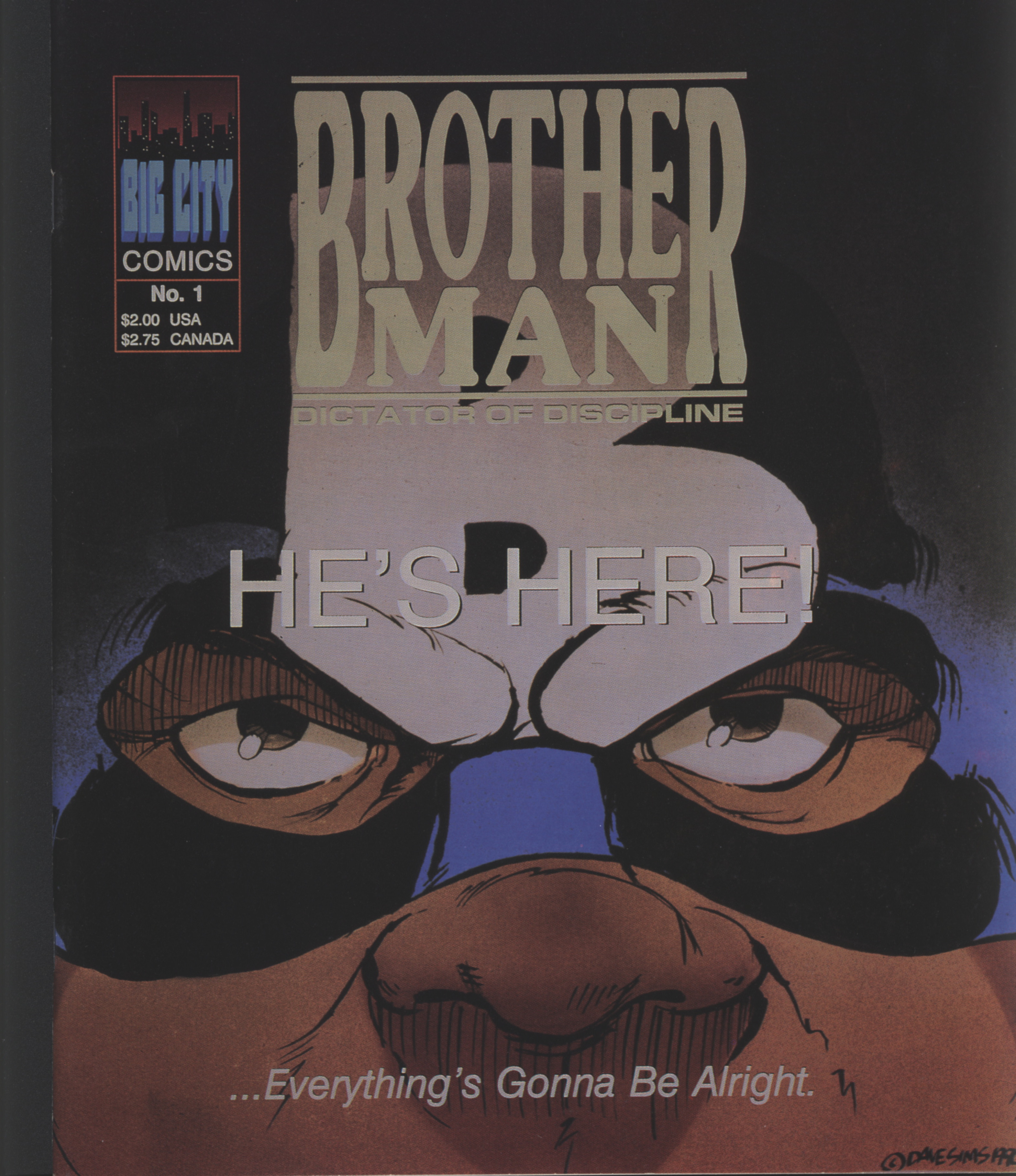 Brotherman Forever is a short film that I carved together early in the project. It is a small tribute to one of my favorite books. Beyond the artistic achievement (art and writing) that Brotherman represents, it must be one of the most successful independent comic books of all time. From brothermancomics.com:

Born from the fire of his father and the passion of his mother, Antonio Valor, forged a commitment to bringing a new justice to Big City.  Brotherman: Dictator of Discipline is the continuing story of a man drawn deeper into the darkness to bring light to those who have lost all hope.  Armed only with his strength, wit, intellect, and his drive, Antonio Valor, straddles the line of being both the keeper and dispenser of the law.  Supported by a sprinkling of friends, colleagues, and confidants, the residents of Big City can begin to find peace in a place under siege. As it is written on the subway walls, “He’s here…and everything’s gonna be alright!”

Brotherman: Dictator of Discipline is the dynamic brainchild of the artist/writing team of Dawud Anyabwile and Guy A. Sims.  Since 1990, the Brotherman series continues to be the most enduring urban hero to be created by an independent company.  The stories have been described as fresh, poignant, exciting, funny, and inspirational.  Widely acknowledged as the spark for the Black comic explosion in the 1990’s, the essence of the Brotherman: Dictator of Discipline series can be seen in many of today’s world of Black and Afrocentric heroes.

Unlike many contemporary magazines of similar genres, Brotherman crosses the boundaries of age, culture, and artistic tastes.  It is in step with both the hip-hop world, as well as the mainstream comic community.  It crosses generations as it is written in a voice that speaks to both the young and mature.  The appreciation for the art work is exemplified through the complimentary mode of replication.  Brotherman brings a new and dynamic medium affecting style, animation, fashion, music, and thought.  Who is Brotherman’s audience?  In today’s world, the answer is “who’s not?”  The African American consumer clamors for images, stories, and mythos that speak to them, reflect them, and generate a cultural pride.  The mainstream comic buyer has the affection for exquisite art styling and intriguing story telling.  Teachers and those of the academic ilk recognize the value of materials that offer kids encouragement for reading and creativity.

This resurgence of Brotherman represents a new voice reaching a global audience.  It presents a new form of animation, a new form of storytelling, an image still untapped, and an image that encourages energy, enthusiasm, and emulation.  Brotherman is poised to reach the world through the magazine, its music, and the digitized world of communication.

Brotherman: Dictator of Discipline is widely recognized as the catalyst for the Black Comic explosion of the 1990’s. As people are looking for an alternative to the slew of cookie-cutter heroes, Brotherman offers within the realm of action and adventure, uplifting and hope filled stories that resonate to the cultural sensibilities of today’s generation. Brotherman offers the broad appeal through the stories and characterizations that reflect honestly the depth of the Black community.

Brotherman made it’s debut at the New York Black expo in April 1990 and has independently sold 750,000 books within a four year span without a major publisher behind it.

In case you did not know (and you SHOULD know), the Brotherman team has released an incredible new graphic novel. The book is what Brotherman has always been, groundbreaking.